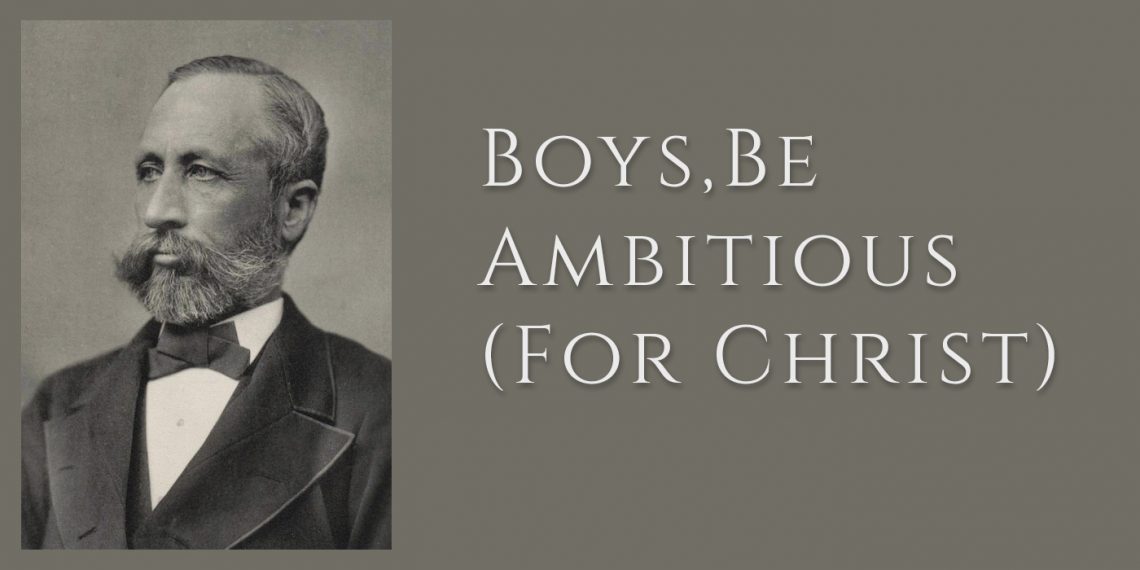 The name William Clark probably doesn’t ring a bell for most Americans, but he’s big in Japan – or at least, a few of his words are. William S. Clark was a native of New England, born in Massachusetts in the first half of the 19th century. He went on to join the Union Army and had a meaningful influence in the Civil War. However, perhaps his most meaningful influence came not in physical warfare in the United States, but in spiritual warfare in Japan.

During the late 1800s, Japan was intent on modernizing the country and invited a variety of academics from across the globe to help towards that end. Clark was one such academic. He moved to Japan in 1876 and remained there for 8 months, helping found what is now known as the University of Hokkaido in northern Japan. At the time, the Bible was forbidden to be taught in government schools across the country, but Clark, who held the Bible in great esteem, made considerable efforts to overcome that obstacle. He was eventually allowed to teach from the Bible as part of ethics instruction. Through his influence, it appears a number of his pupils became Christians and had further influence throughout the country.

None of this is what Clark is most famous for, however. Rather, his fame comes from a few words he spoke as he departed his students and fellow staff members. The scene as traditionally painted is reminiscent of a dramatic Hollywood film – Clark sits on horseback with students and staff gathered around, sharing a few last words with all. As he finally rides off into the distance, seeing his last opportunity to share any wisdom, he turns back and yells to the crowd – “Boys, be ambitious!”

There’s some debate as to what Clark said specifically. Some say his words were actually “be ambitious for Christ” or “be ambitious for God,” but the murk of history has obscured the truth. The Christian version is certainly in keeping with the character of Clark, but we’ll likely never know what exact words were uttered that day.

Whether he said those words or not, the idea of being ambitious for Christ has stuck with me every since I first heard the story.

In modern society, we place great emphasis on ambition. We’re encouraged to hustle and to be ambitious for material success. The world tells us we can do more – and by more, it means more success financially, materially, in our careers and so on. I’m not trying to be a downer on those things necessarily, but I can’t help but wonder – what if the church put that kind of ambition into the things of Jesus? What if we followed Clark’s advice, and were ambitious for Christ?

There’s a place for Christian ambition. By that, I don’t mean material ambition shaded with Christianity; I mean ambition that is about Christ and the gospel. Jesus encouraged this kind of ambition in his teaching. Consider the parable of the talents in Matthew 25:14-30. The ones who are called “good and faithful servants” are those who were ambitious for master, using the talents given them to produce more on top of them. Meanwhile, the fearful and lazy servant was condemned for his failure to be ambitious and fruitful. We also see Jesus’ clear desire for us to be fruitful in John 15, which I talked about in a previous post. We see Godly ambition both in the OT (e.g. Joshua, David, Nehemiah) and the NT (e.g. Peter, Paul, Timothy). Clearly God wants us to be ambitious for his Kingdom!

Of course, there is a bad kind of ambition that we should seek to avoid (James 3:14). When our ambition causes pride, selfishness, and divisiveness, we can know that such ambition is not in tune with the Kingdom of God or the Holy Spirit. But when our ambition is directed at being fruitful for the Lord while maintaining a humble, peaceful spirit, we can be sure that this is pleasing and glorifying to God.

As our family moves forward with the work in Japan, I hope that we will be ambitious for Christ in our plans, and continue in this ambition on the field. Please pray for us, that we will be fruitful, that the fire of Godly ambition will not dim or die, but continue to burn and motivate us to produce fruit for the glory of God. And I encourage you to follow the advice of Clark as well, wherever you are – be ambitious for Christ! There is much work to be done across the globe. May we be ambitious in fruit and service to our King.

Helps us be ambitious for Christ in Japan! Find out how to partner with us by clicking here.

One Of The Dumber Things I’ve Said